Terry Peterson, Board Chair of the Afterschool Alliance, has been a leader in the afterschool movement for many years. We conducted a video interview with Terry after the 2016 elections. Below we have provided an edited version of this video interview.

We also selected some responses from the longer video interview, which you can read below. 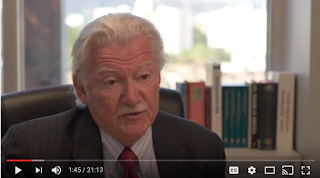 Q: Can you offer any positive advice with the election of President Trump?

A: Obviously, everybody's tuned into the Presidential results from the 2016 election, and they're very important, but we need to keep in mind that much of the programming, and even funding for afterschool comes locally, from municipalities, school districts, United Way's, and other local foundations.

In some states such as California, New York, Illinois, Connecticut, Tennessee and others, public funding comes from the city, state, and federal levels. What I would recommend to people is that they work at all those levels to expand the number of programs locally.

Q: What have we heard from President Trump that may predict future opportunities for afterschool?

A: I would consider the following:
• Tax credits: His daughter, actually put forth in the election, a proposal to increase the tax credits in refundable tax credits for families who pay for childcare, which would be a whole new interesting way to support families. They would have to put some out-of-pocket expenses in, but they might get part of it back. Many parents pay 4,000 - 5,000 dollars a year, per child, for afterschool and summer programming. If they could perhaps get some of that back, as a tax deduction, or if they're a low income family, we'd get a tax rebate, that might really help us expand the field. It's a very different way than direct funding, but we need to look at that.

• Infrastructure: President Trump has proposed a big infrastructure building program. I don't know what it's going to include, but he has mentioned schools.

What about if schools that are being remodeled, they create an afterschool community learning wing, with the latest technology for kids and families? That might be a possibility. It is a very different approach, but we need to reiterate, we need to keep working at the local level with local foundations, city, state, and federal levels, maybe in some new ways and see if we can continue to move this field forward.

Q: What are recent developments in the afterschool field that you think are important?

A: We now have what you might call an afterschool infrastructure or platform, but not everywhere. We still have a lot of places where we don't have any programs – places where we might need them the most.

In many places in the country, we have quality afterschool programs that allow us to use afterschool partnerships and programming to get into new areas where young people need support.  A couple of areas of recent developments that I think are particularly exciting:

• College and Career Readiness – There is a growing concern that middle and high school students don't have a real clear path to graduate from high school. "How do I go to college? How do I get a job? What kind of workforce skills could I get, or do I need?" We could start working on those workforce skills and college and career readiness in afterschool programs by partnering with businesses and community colleges.

• STEM and STEAM - There's real interest right now in science, technology, engineering, and math (STEM) fields. When you throw arts in there, it's STEM + the arts, it's STEAM. There is a lot of interest in how you could use afterschool and summer programs to interest students in STEM or STEAM.

Some really good examples around the country have been able to take students that said, "Ooh, science, math, I can't do that". They go through the summer program, afterschool program, build robots, use dance and drama to learn technology or science, or learn coding and come out saying, "I think I can do that".


One of the award-winning summer learning programs named by the National Summer Learning Association, was a STEAM Summer Learning Program that I'm very familiar with. They have a five-week program where they teach STEM only through the arts - through dance, drama, visual arts, and music. It's an all day program and attendance is about 90 percent. You walk in there and they're engaged fully. I think we need to find ways to bust out from just sort of our typical way of delivering programs.


• Entrepreneurial education - A lot of young people say, "I don't want to work for a company. I want to start my own business". You can run entrepreneurial learning, community service, and afterschool and summer programs that really help young people engage in their community, and in their growth in some new ways.

• Credits for participation – Older youth can earn credits in afterschool and summer programs. For children who are struggling in school, if they fail a subject or two, they never get to interesting advanced content. They bubble along at the bottom of the courses, so they never see the power of taking more advanced courses. They can't get to the design course in arts or career and technical fields.

A few places are now experimenting with offering credits in afterschool and summer programs. In addition to the credits offered during the school day, they can be involved in another program afterschool, weekends and summer, and earn another credit or two.

Think about that. For five years, you can earn almost a semester worth of credit. For some kids, those credits are powerful door openers to get into community college or a four-year college. That's another area we need to explore, and there's starting to be interest in.

-------------------------------
Dr. Terry K. Peterson is Board Chair of the Afterschool Alliance and Senior Fellow at the Richard Riley Institute at Furman University and College of Charleston. Former U.S. Secretary of Education Dick Riley has called Terry “the king of afterschool.” During his decades-long tenure in public service, Terry held senior state- and federal-level positions in which he developed numerous education policies and funding streams, including at the U.S. Department of Education where he helped create the 21st Century Community Learning Centers initiative.

You can read other blogs by the LIAS project by going to: