In her recent blog entitled "Creativity is the Secret Sauce in STEM" published by Edutopia, Ainissa Ramirez wrote, "Creativity is the secret sauce to science, technology, engineering and math (STEM). It is a STEM virtue. While most scientists and engineers might be reluctant to admit that, and to accept the concept of STEAM (where A is for Art), I’ve witnessed that the best of the best are the most creative.

So how do we make our children more creative?


Researchers have found that play is important for productive thought.Playing with ideas also increases learning. We must encourage playing with concepts to nurture creativity in students."

To explore this notion of creativity, I interviewed several people in the arts, including Judith Leinen, a young adult sculptor from Germany and Sheri Simons, an art professor at Chico State University. Below are some of their responses to my questions.

How would you define creativity for yourself?

Judith: There's one thing I can often see in creative processes. It's a paradox interplay between knowledge and forgetting knowledge. Every decision is made in a system with laws of nature and general principles or even with the knowledge of common ways to do something or to solve a problem. A creative way of working would often ignore or overcome these contexts but with the knowledge about all of these rules in mind. Maybe a definition for creativity could be "a flexible mind".

How important is creativity in your life?

Judith: I think creativity is important for everybody's personal life and also for every society itself. To me, its the key to development and also to critical thinking. To me it's much more than a floating skill in a context of art but a general ability and a part of thinking in general. I would consider creativity as a very important thing in my life.

When you were young, how was creativity supported?

Judith: I think the biggest influence in my life was my father and my grandmother, who lived in the same house. My grandmother always challenged, questioned and tried out a fact or a rule before she accepted it. She did this with small things, for example, instructions in any recipe. “No we'll do this different and take cream instead of milk....” I think this had an effect on me. It made me act in a similar way and led me to experiment in my daily life. As I grew up I had nearly no access to contemporary culture like exhibitions or theatre. But I always wanted to build something. My parents would provide me with tools and craft supplies, would always involve me in hands-on projects around the house, and also encouraged me and my siblings to invent self made gifts.

In public school, I had art as a subject from the age of 6 to 18. Looking back,  I think this was a giant support for creativity and also an intense influence on all the other subjects.

As an art instructor, how have creative endeavors benefitted your students?

Sheri: By allowing them to practice divergent thinking, not settling for the first thirty ideas that slide off of the top of the brain easily; and accepting trial and error as a methodology.


Do you find that creative endeavors are easy, fun, or hard and challenging?

Sheri: Both, neither and all. In sculpture we say, “Everything works on paper”… meaning you have to take the idea into the world. Easier said than done. There are many searches involved in that activity: materials, ideas, gravity, and reality. So even more than the fun or easy or hard or challenging, there’s the simple satisfaction of TRYING things out, which means you interface between the thoughts in your mind and the real world. The learning quotient is somewhere between what you think and what you do.

How did engaging in creativity when you were young shape your adult life?

Judith: I think it shaped my approach to a lot of small daily life decisions, figuring out daily decisions and logical problems. But also in a more general way, it shaped my skills and access to my environment. It provided a pool of personal experiences. I was able to collect these experiences that included simple insights about the world and my engagement with it. I was always encouraged to act in a creative way.

Is there a reason why we should keep the arts as part of the educational experience?

Sheri: Dubuffet said, “Art is to disturb”. To make waves might mean beauty amid the ugly. It may redefine both terms. It calls for constant awakening. If we stop teaching visual thinking, how long might it take before we become art somnambulists? Lazy in our eyes, clumsy fingers, lost in our problem solving abilities, and ultimately prone to submissive living?

Do you think the typical child in schools is given enough support and access to creative expression?

Judith: I don't think so. From my point of view, creative activities in public schools are often not as appreciated as they should be. My experience is that the arts are usually the first subjects to be cut in tight financial times. Creative expression should be supported as it can lead to successful results in scientific subjects or even help to formulate one's own opinion in social, philosophical or linguistic subjects. A specialty of public schools is that their curriculum is accessible in a very democratic way and to all children independent of their economic background. But if creative education at school is replaced by other programs, it will only be accessible by privileged children. Thus, public education would not comply with its responsibilities.

Do you have any thoughts you would care to share on the link between creativity and learning?

Judith: I think creativity is fundamental for any kind of learning and thinking. Learning is more than just acquiring knowledge - it includes a way of thinking. It includes the ability to use this knowledge in our daily lives, making connections between different fields of information, linking facts in a logical way, and in transferring our knowledge from one context to another. Without the ability to use cognition with creativity, most of the learned content would just be empty information. The practice of tackling projects that require creative thinking has a large influence on our ability to find solutions and solve problems. It allows us to apply theoretical knowledge to practical life.


Judith Leinen was born in 1985 in a village close to the German- Belgian Border.  After her Abitur degree she studied fine arts, mathematics and pedagogics in Mainz, Germany. Since 2007 she has participated continuously in solo- and group-exhibitions. With the art-group Upper Bleistein, she realized several art projects, interactive sculptures and space- related installations  revolving around issues like public space, imagination and reality, parallel worlds, participation and communication. In 2010 a catalog documenting the work of Upper Bleistein was published by Gonzo-Verlag. Her first public commission was installed in summer 2013 at a school in Mainz, Germany. Judith Leinen worked freelancing as a pedagogic for different organizations and directed Media projects with youth. Judith Leinen is currently enrolled in a postgraduate program at California State University Chico as a guest scholar.

Sheri Simons is interested in sculpture as an instrument, broadly defined as something that aids in or causes an action or a reaction. Working in wood, sound, and movement for the last eleven years has led to solo and group exhibitions at museums and galleries in the U.S., Canada and South America.

She has received grants from the National Endowment for the Arts, The California Arts Council and The Michigan Council for the Arts. Public arts commissions in California, Ohio, and Washington have provided the opportunity to think large, incorporate pedestrians in art, and experiment with varied media. Her commissions include public installations for three libraries, a juvenile court, and an administration building for the Water Board. In addition to maintaining a studio practice, Sheri is a professor in the sculpture area of the Department of Art and Art History at California State University, Chico.

Think Outside the Classroom


It wasn't long ago when we had to defend afterschool programs if they didn't raise test scores. We were told that "if it doesn't raise the test score, learning didn't happen". Some stood in opposition to this reductionistic thinking while others cowered with fear of losing funding. Today, the clouds are parting and the pendulum has swung the other way, as educators better appreciate what afterschool and summer programs can do. This is due in part because of the failures of No Child Left Behind and new studies on the importance of social emotional skills, 21st Century learning skills, findings from neuroscience, and many other areas that show that learning is more than a test score. And the willingness to take risks, make mistakes, persevere in the face of a challenge are all important parts of learning. 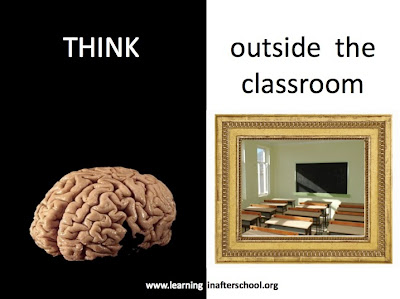 The upcoming How Kids Learn conference in October is a celebration of these developments as it focuses on the importance of play, creativity, tinkering, and the arts in children's learning. In the conference, participants can hear from the founder of the Maker Movement, educators and researchers from the Center for Childhood Creativity and the Exploratorium, and new research sponsored by the DOE on the importance of grit, perseverance, and tenacity. The conference will also sponsor breakout groups led by innovative practitioners and allowing participants to experience their techniques in a hands-on way. For more information and to register, click here.

Moving away from the old API score and a single standardized test score to evaluate schools will be tricky. The California Board of Education and legislators in Sacramento will have to name the multiple measures that will take the place of the API ranking. For a detailed description of what has to be done and who has to do it, see this EdSource briefing here. Meanwhile, it is important that we declare what afterschool can do, hold our positions when pressure returns, and be sure that we have the quality programs that can fulfill the logical promise of afterschool and summer learning experiences.