I had the pleasure recently of watching a high school presentation of Spring Awakening at Berkeley High School. This is the play that was a big success recently on Broadway and gave Lea Michele, star  of Glee, her start. Last week, I attended the annual dance performance by students from the San Francisco School of the Arts. The experience was the same - I was bowled over by the young people's intense commitment to mastery and commitment to the goal they shared with their group. Talk about developing a sense of purpose - a sense of mastery and agency - it was quite amazing. So enough of having to defend having arts programming, particularly performing arts, in our afterschool programs.

Want more: Oakland Technical High School's drama program was recently featured on KQED's California Report. It has risen from the ashes to be acknowledged as one of the best in the country and it has had a big effect on students. Take a listen.

"Before I lived here, when I didn't have theater, my GPA was below a 1. Then I just got into reading, working, and learning because that's what you have to do to be in theater - you have to learn a lot about everything to be in the play. So I just kind of got into doing work because it really built a lot of that integrity and now I'm like a 3.5 GPA, which is really weird for me because that's never happened before." - Jacob Moore, Senior at Oakland Technical High School

Want more: Watch this video of Philadelphia Assistant Superintendent of Schools explain why arts programming is essential to teaching kids how to reach their full potential.

Want more: Read about the rationale for cuts in arts programming and why the arts are essential.

Want more: I do! Let's celebrate the arts in afterschool and shout out all the good reasons why we have saved them.
at May 23, 2014 No comments:

The post below is a reprint of my Op-Ed that was published in Youth Today on May 5, 2014.

There has been an explosion of interest in providing young people with learning opportunities in science, technology, engineering and math (STEM). Many have argued correctly that afterschool and summer programs are perfectly situated to respond to this interest.  After all, the out-of-school (OST) environment provides the teacher and learner with a flexibility not found in school – the freedom to choose interesting topics, the ability to extend the learning activities across time (days or even weeks), the advantage of working in smaller groups, and use of the larger community and their surroundings as a classroom. However, the rush to offer STEM-related activities has not necessarily resulted in quality programming.

Many OST managers figured that STEM activities meant a focus on content, without an eye on what makes for a good learning experience. But successful STEM activities are more than content. They are designed to ignite young people’s imagination and involve them in ways that excite them as learners. Those responsible for providing STEM activities need to provide staff training using a framework for learning and engagement.

Research on learning and engagement suggest several principles to guide the design and implementation of activities. To begin, learning activities must be active. They must be collaborative and meaningful to the participant. They should support mastery and they should expand the horizons of participants. These principles have become influential in how the state of California now defines quality OST learning programs. 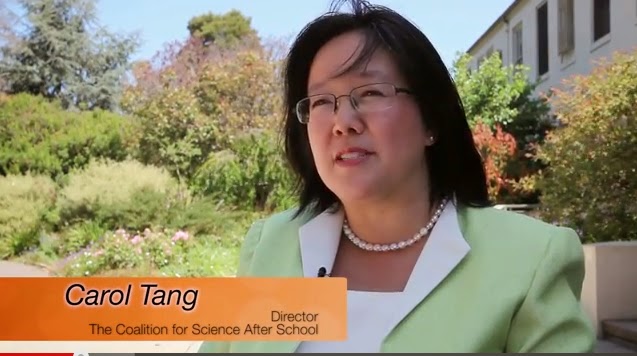 According to Carol Tang, former Director of the Coalition for Science After School, these principles are relevant when applied to STEM.  She says, “A lot of young people are turned off because they had bad experiences learning about science.  If you look at these learning principles, I think it’s a way to really look at science education, and take a step back and say it is really about doing science.  If you think about what scientists do, they are active and hands on, they make things and break things, they talk to their peers, they learn from their mistakes, and they get better with time. If we don’t get kids excited about science then they can learn as many facts and figures that their brains can hold, but that’s not really going to help us.” (You could also view an interview with Carol Tang by clicking here.) 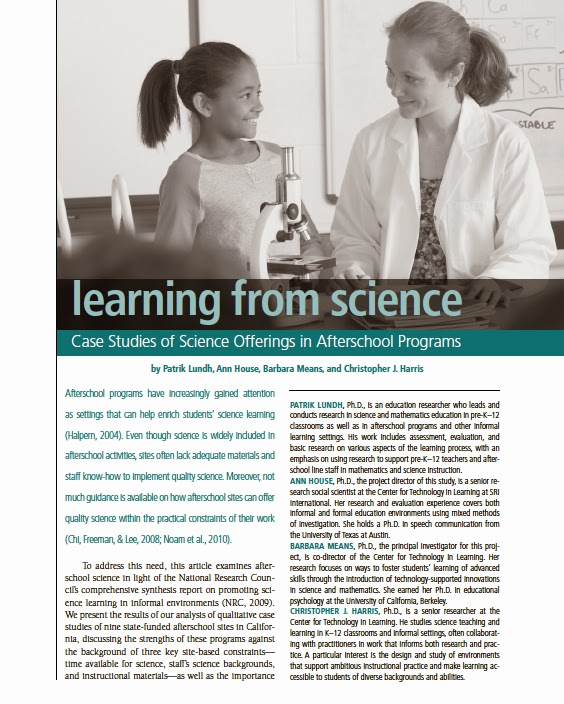 SRI International recently published the first part of a 5-year National Science Foundation funded research project, the Afterschool Science Networks study. In this important report, SRI presented case studies of science activities in California afterschool programs and identified “staff capacity” as one of several limitations. Many of the issues in staff capacity involved the failure to engage and can be addressed through staff development on how to engage young people as learners. Part of this is allowing young people to learn in a hands-on fashion and facilitating questions instead of giving answers.

According to Dr. Ann House, leader of the SRI study, “We believe that the learning principles developed by the Learning in Afterschool & Summer project are very well aligned with inquiry science activities. For example, conducting investigations, collecting data, and designing solutions make learning activities active, meaningful, and support mastery. Engaging in scientific reasoning and argument deepens the meaningfulness of activities and often involves collaboration. Finally, investigating science phenomena and designing solutions broadens youth’s horizons. Their horizons can also be broadened as they learn more about STEM-related careers and how STEM skills and knowledge can help them become more informed citizens.” (To view our interview with Dr. Ann House, click here.)

The growing number of afterschool programs focused on STEM is an exciting development. But if children are to develop a growing interest in STEM topics, we need to think about how children learn when we design the activities and prepare adult staff to facilitate them. This can be accomplished through training and materials that offer a framework for learning and engagement.
at May 19, 2014 No comments:

Tom Little: A Champion for Progressive Education and Youth Development


Those of us who are committed to progressive education principles and their use in classroom and out-of-school learning programs lost a great friend last week with the passing of Tom Little.

Tom was one of three founding teachers of Park Day School in 1976, a progressive K-6 school in Oakland, CA. I had the pleasure of teaching at Park Day School for five years, two of those years as a co-teacher with Tom. Nearly everything I know about youth and youth development came from this experience.


Tom went on to become the Director of Park Day in 1986. Under his leadership, Park Day expanded to include a middle school and managed to buy the property that is now their beautiful campus.

I also had the opportunity to experience Tom's leadership as a parent at Park Day. Tom was masterful at creating a sense of community and ensuring that all children engaged in what we now call social emotional learning (SEL). We used to think of Park Day School as our church in passing along the values of citizenship and social justice.

In partnership with Temescal Associates and the Learning in Afterschool & Summer project, Tom hosted a public showing of Brooklyn Castle, participated in an LIAS video, speaking in support of the LIAS learning principles, and provided access to the Park Day campus for the taping of several other interviews with afterschool leaders. He was committed to equity in education and freed up teachers and youth to provide support to local public schools.

Last year, Tom used his sabbatical to visit progressive schools across the country. He wrote a book about this experience, which will be published in the near future. Tom's legacy will live on for a long time, through the demonstration by the practices at Park Day School. He was a good friend and inspiration to a large number of East Bay families, youth, and educators. He will be sorely missed.

However, it is also important that practitioners understand not only what promotes learning but the environmental factors that impede learning. These factors are related to complex trauma - children who have experienced physical or sexual abuse, abandonment, domestic and neighborhood violence, and/or having a parent or close family member incarcerated. 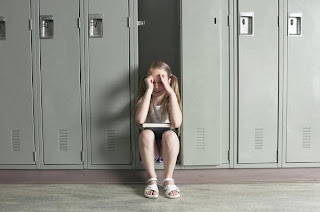 "In the brains of traumatized youth, neural pathways associated with fear and survival responses are strongly developed, leaving some children in a state of hyperarousal that causes them to overreact to incidents other children would find nonthreatening, the research shows. Consumed by fear, they find it difficult to achieve a state of calmness that would allow them to process verbal instructions and learn, according to the Child Welfare Information Gateway of the U.S. Department of Health and Human Services.

And many children are experiencing chronic stress, according to data. In 2012,
California child welfare agencies received 487,000 reports of child abuse and neglect. Nationally, an estimated 1 in 4 children has witnessed a violent act and 1 in 10 has seen one family member assault another, according to the federal National Survey of Children’s Exposure to Violence, sponsored by the Office of Juvenile Justice Prevention and Delinquency Prevention and the Centers for Disease Control." (1)

By Sam Piha The COVID-19 pandemic wreaked havoc with afterschool programs. The one silver lining was the abundance of online professional de...