A recent front page article in the San Francisco Chronicle entitled, "Return of debate teams is helping urban students find their voices" reminds us that debate is an excellent way to promote learning that is aligned with the Learning in Afterschool principles. Eric Wilcox, a teacher at Balboa High in SF says, "It's one of the great tools to hook kids who aren't being served by the current institutional models."

When we launched the Learning in Afterschool Project, we placed two videos on our website featuring debate as an excellent learning opportunity. One is a "60 Minutes" feature highlighting a champion urban team in Baltimore, and the other is from Fire in the Mind. 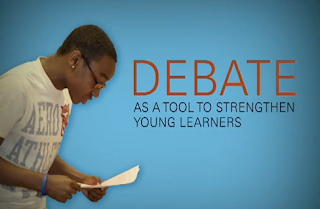 We're happy to see debate gaining acclaim as a way to engage and inspire kids.

For more information about sponsoring an Urban Debate team, you can look at the National Association for Urban Debate League.


You can also check out the Bay Area's own chapter, Bay Area Urban Debate League.
at August 15, 2011