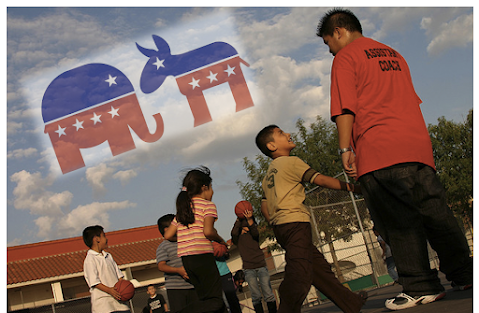 By Sam Piha
We wanted to get a better understanding of the bipartisan support for afterschool, of the past and present. We interviewed Dr. Terry Peterson who was the Chief Counselor for former US Secretary of Education and Governor, Dick Riley. Terry was involved in the launching of the 21st Century Community Learning Center Initiative.
Q: Can you say something about the bipartisan roots of the afterschool movement?
A: I find it very useful to trace overtime the bipartisan roots and continuing support for expanding, funding and improving summer enrichment and comprehensive afterschool and expanded learning opportunities and partnerships.

The “roots” of the 21st Century Community Learning Centers in the 1990’s clearly involved Republican and Democratic members of Congress and a Democratic Administration.
The roots in California involved bipartisan support in some key cities in the late 1980’s, like Los Angeles, San Francisco, San Diego and Sacramento and then spread greatly with the strong leadership of a Republican Governor, Schwarzenegger, and then much later, now, a huge expansion by a democratic Governor Newsom. This type of local, state and national expansion of an initiative overtime is very unusual and very important.
Q: What kind of politics are needed to support afterschool, summer and expanded learning programs?
A: It is critical to keep this bipartisan support for afterschool, summer and expanded learning. Unfortunately, in these highly politicized times, certain concepts and especially acronyms and initials are magnifying the polarization. Because of the benefits seen for many years of bipartisan support for more and better afterschool and summer opportunities and partnerships, I think we have a special obligation for our children, youth and families served by afterschool, summers, and expanded learning to try to stay above these battles when representing the afterschool, summer, expanded learning and community school movements.
One way to stay above the fray is to go back to our simple roots and concepts, like expanding opportunities and developing more community connections for children, youth and families that want and need afterschool and summer programs to better succeed in school and life. By the way, this is not just good education and youth development but good “politics”. Most voters and parents of most political persuasions appreciate terms like “expanding opportunities” and building more "community connections” and "local partnerships."
Another way is to approach voters and parents differently using everyday common-sense ways. For example, we know that in some localities, states and nationwide, certain terms like SEL and related terms are “offending” some Republicans and even Independents. While operating in the afterschool, summer, community schools and expanded learning arenas, why not use concepts that are similar, but that parents of many political persuasions approve of?
Q: There is a myth that Republican parents do not support funds for afterschool programs. Do we have research that suggests something different?
A: We have found that Republican parents support funding afterschool and summer programs as well as Democratic and Independent parents. Interestingly and importantly, they all support very similar content in the programs. And this content is similar to the research evidence too.
Unpublished analyses by the Afterschool Alliance done very recently, found:
Support for afterschool and summer learning programs is strong among Republican parents. More than 8 in 10 parents who identify as Republican agree that all young people deserve access to quality afterschool and summer programs (82%).
From providing children opportunities to build life skills to helping working parents keep their jobs, Republican parents overwhelmingly agree on the positive role afterschool programs play for children and families.
Strong majorities of parents who identify as Republican agree that afterschool programs:
Republican parents also agree that afterschool programs provide working parents peace of mind knowing that their children are safe and supervised (83%), help working parents keep their job (81%), and keep kids safe and out of trouble (74%).
Focusing on activities and supports, Republican parents are as likely as parents overall to report that opportunities for their child to build life skills were important in their selection of afterschool and summer programs. Similar to parents overall, most Republican parents report that opportunities for their child:
Republican parents want public investment in afterschool and summer programs. 85% of parents who identify as Republican report that they support public funding of afterschool programs and 86% support public funding of summer learning programs.
MORE ABOUT…

Terry Peterson was the Chief Counselor for former US Secretary of Education and Governor, Dick Riley. During his decades-long tenure in public service, Terry held senior state- and federal-level positions in which he developed numerous education policies and funding streams, including at the U.S. Department of Education where he helped create the 21st CCLC initiative. Terry currently serves on the board of the Afterschool Alliance and is also the executive editor of, Expanding Minds and Opportunities: Leveraging the Power of Afterschool and Summer Learning. He is also featured in the History of Afterschool in America documentary.

Over the past 30 years the afterschool movement has enjoyed public support and the support of elected leaders from both sides of the aisle, at the local, state and federal levels. However, this is being threatened by a political climate that is plagued by polarization, misinformation and the rise of education culture wars. The core values of many afterschool programs are being scrutinized including issues concerning equity, mindfulness, identity (racial and LGBTQ+), growth mindsets and social emotional learning (SEL).
In this upcoming Speaker''s Forum, our panelists will review afterschool’s bipartisan history, the rise of today’s education culture wars, and ways that afterschool programs can avoid entanglement in these controversies and promote bipartisan support. Join us on September 13, 2022 from 10:00am-12:00pm PST. To learn more and register, click here.
at August 17, 2022