Reporter, Paul Tough, recently authored a book entitled How Children Succeed.  It has stimulated conversation among educators and afterschool and summer providers. This book can be ordered by clicking here, and Paul can be heard on a recent This American Life radio broadcast by clicking here.

Mr. Tough was unable to attend our recent How Kids Learn II conference but offered the responses below, many of which are drawn from his own website.

Q: What made you want to write How Children Succeed?

A: In 2008, I published my first book, Whatever It Takes, about Geoffrey Canada and the Harlem Children’s Zone. I spent five years reporting that book, but when I finished it, I realized I still had a lot of questions about what really happens in childhood. How Children Succeed is an attempt to answer those questions, which for many of us are big and mysterious and central in our lives: Why do certain children succeed while other children fail?

Q: Where did you go to find the answers?

A: My reporting for this book took me all over the country, from a pediatric clinic in a low-income San Francisco neighborhood to a chess tournament in central Ohio to a wealthy private school in New York City. And what I found as I reported was that there is a new and groundbreaking conversation going on, out of the public eye, about childhood and success and failure. It is very different than the traditional education debate. There are economists working on this, neuroscientists, psychologists, medical doctors. They are often working independently from one another. They don’t always coordinate their efforts. But they’re beginning to find some common ground, and together they’re reaching some interesting and important conclusions.

A: Until recently, most economists and psychologists believed that the most important factor in a child’s success was his or her IQ. This notion is behind our national obsession with test scores. From preschool-admission tests to the SAT and the ACT – even when we tell ourselves as individuals that these tests don’t matter, as a culture we put great faith in them. All because we believe, on some level, that they measure what matters.

But the scientists whose work I followed for How Children Succeed have identified a very different set of skills that they believe are crucial to success. They include qualities like persistence, curiosity, conscientiousness, optimism, and self-control. Economists call these non-cognitive skills. Psychologists call them personality traits. Neuroscientists sometimes use the term executive functions. The rest of us often sum them up with the word character.

Q: Who are the big thinkers behind these ideas?

A: The central scholar in this movement is James Heckman, a Nobel prize–winning economist at the University of Chicago. He’s the one who did some of the first work identifying and quantifying these non-cognitive skills. And in recent years he has been working to pull together thinkers from lots of different disciplines — psychologists and economists and neuroscientists and geneticists — to get them to share ideas and find connections between their theories.

The book includes plenty of others doing important research, from Angela Duckworth, a psychologist at the University of Pennsylvania who studies self-control and grit; to Michael Meaney, a neuroscientist in Montreal who found a remarkable connection between a mother rat’s licking-and-grooming habits and the future success of her offspring; to Suniya Luthar, a psychology professor at Columbia University who has written about the unique stresses faced by kids who grow up in affluence.

Q: How do these ideas play out in the lives of actual kids?

A: There’s a lot of science in How Children Succeed, but much of the book is taken up with stories of young people trying to improve their lives, and the teachers and counselors and doctors trying to help them, often using unorthodox methods.

Sometimes these kids are achieving great things: Take James Black Jr., a student who just graduated from Intermediate School 318 in Brooklyn. He grew up in a low-income neighborhood, he has siblings who’ve spent time in prison, and he doesn’t do great on traditional tests of cognitive ability. But he might be the best thirteen-year-old chess player in the country. I followed him for a year, trying to figure out why he’s so successful.

When I started my reporting, I thought what everyone thinks: that chess is the ultimate intellectual activity, a skill inextricable from IQ. But to my surprise, I found that many chess scholars now believe that chess success has more to do with non-cognitive skills than with pure IQ. James’s chess teacher at IS 318 is a woman named Elizabeth Spiegel. She’s a great teacher, and I think what makes her so good is that she’s able to help her students develop their non-cognitive skills to high levels — in James’s case, to very high levels.

__________________________________
A contributing writer to the New York Times Magazine, Paul Tough is also the author of Whatever It Takes: Geoffrey Canada's Quest to Change Harlem and America, which focuses on the steps necessary to improve the lives and education of underserved children. Through the case study of the Harlem Children's Zone, Tough describes the inspiring struggle to establish a way to combat poverty that could be replicated nationwide. Tough has also contributed to This American Life and The New Yorker, where he has honed his focus upon education, poverty, parenting, and politics.

The Holidays, Gratitude and the Youth Vote

All of us at Temescal Associates, the How Kids Learn Foundation, and the Learning in Afterschool & Summer Project wish you a peaceful an... 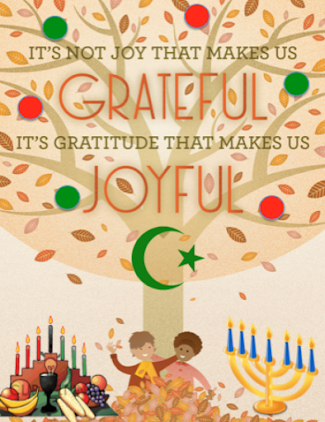