Since we launched the Learning in Afterschool & Summer (LIAS) project, we have published over 381 blog posts, attracting over 500,000 views. In 2019, we published over 40 blog posts and below, we list some of our favorites.

INTERVIEWS
An Interview with Ivan Garcia, Youth Activist (March 2019)
Ivan Garcia is a youth activist in Oakland. We first heard about Ivan’s work through a program by a local NPR station. This program was later turned into a brief video. At the How Kids Learn VIII conference, Ivan was a presenter and panelist on the subject of youth activism. According to Oakland Mayor Libby Schaaf, “I love Ivan. He's a leader. I can't wait for him to sit in my office. And I mean be the mayor. He's going to be an amazing mayor. And maybe [to Ivan] you're going to bring your talents to some better pursuit besides politics. Whatever it's gonna be, it's gonna be amazing. And you always do it, Ivan, with love and respect.” Read more.

An Interview with Youth Development Researcher, Reed Larson (February 2019)
According to the Chronicle of Evidence-Based Mentoring, "Reed Larson’s seminal research on the lives of teenagers helped to launch the field of positive youth development, and his insights and findings continue to enrich the work of mentoring researchers. His work explores the contexts of daily life and how developmental processes unfold in extra-curricular activities." Read more.

Youth Activism and Social Media: An Interview with Historian Gordon Alexandre (April 2019)
Since the school shooting in Parkland, FL and the response of young people to gun violence, we have all become more aware of youth activism and civic engagement. We were curious about how youth have been involved historically in social movements, and the effect of social media on social movements. Thus, we interviewed Gordon Alexandre, a historian and activist about these questions. Read more.

A Mindfulness Story For Kids By Kids: An Interview with Laurie Grossman, Inner Explorer (January 2019) 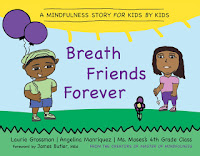 We have been promoting the use of mindfulness techniques in afterschool, for both young people and adult staff self-care, for many years. We are happy to announce that a second book created by young people on this topic was recently released. “From the creators of the hugely successful Master of Mindfulness, this charming children’s book for readers ages 4 to 7 tells the story of Nessa and Leo’s friendship, and how mindfulness helps them deal with strong emotions such as fear, shyness, and anger.” -Greater Good Science Center, UC Berkeley. Read more.

Local high school students spoke with Hal Eisner, FOX 11 about how much Afterschool Programs have meant to them and their fellow students. They stated what a drastic blow it would be if there should be a cut to funding for these critical programs. Both Abigail Miranda and Lynn Kim were articulate and passionate, and spoke from their hearts. All of the state's high school afterschool programs would be eliminated if President Trump's budget is approved. According to Abigail's EduCare Site Coordinator, Viancha Carchi, everyone listening was touched by her story. We're sure you will be, too!   Read more.

William S. White, the Chairman of the Charles Stewart Mott Foundation passed away on October 9, 2019.  Bill was a monumental leader in the world of philanthropy. Working with many of you as well as many other foundations and organizations, he and the Mott Foundation have had and are continuing to have a tremendous positive impact on the afterschool and community learning center movement. Read more.


OTHER FAVORITES
Is Play a “Waste”? (October 2019)
There is an inscription over a public school in northern Washington state that reads “Waste Not Thy Hour”. It reminds me of how young people’s play is often regarded as a waste. For many, play is the antithesis of learning time, however, there is growing evidence that there is a great deal of learning in play. Now is the time to reexamine the value of play, educate our stakeholders, and be unashamed to make play an important part of our afterschool programs. Read more.

Teacher strikes are not new, but they are on the increase. In 2018, teacher strikes occurred in West Virginia, Oklahoma and Arizona. They also inspired smaller-scale protests by school staff in Kentucky, North Carolina, and Colorado. In 2019, we have seen strikes in Los Angeles (which appear to be settled), and there are rumblings in Denver, Chicago, and Oakland. Motivations for the strikes include increased wages for teachers and support staff, larger school budgets, and smaller class sizes. Read more.

Afterschool Learning that Supports Mastery (May 2019)


Young people tell us they are most engaged when they are given opportunities to learn new skills. If young people are to learn the importance and joy of mastery, they need the opportunity to learn and practice a full sequence of skills that will allow them to become “really good at something.” Afterschool activities should not promote the gathering of random knowledge and skills. Rather, afterschool learning activities should be explicitly sequenced and designed to promote the layering of skills that allows participants to create a product or demonstrate mastery in a way they couldn’t do before. Read more.