What it Means to be a Poor Child in America

Many of our afterschool and summer programs are serving youth from low-income communities. We believe that poverty is a major issue affecting the learning of these youth.

Below, we repost a newsletter from the Broader, Bolder Approach to Education (BBA) on the topic of children in poverty. The BBA has been a strong supporter of the afterschool and summer movement, and of LIAS, specifically. Read the BBA Mission Statement and Accountability Statement to learn more. Use the BBA short video and infographic to spread the word. We urge you to visit their website and reflect on this issue.

This month we explore what it means to be poor in America and how that affects students and their families and schools. Growing up in poverty often means not having enough money for rent or food, but it’s much more than that. We devote this newsletter to various perspectives on the issue. In doing so, we hope to underscore the urgent need for a multifaceted, sustained approach to addressing the barriers to success that poverty poses and reducing its prevalence. Such an approach is critical not only to improving our children’s academic future, but a brighter future for our democracy. 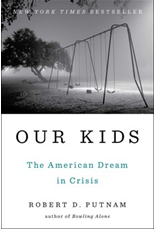 We begin with thanks to Robert Putnam, whose seminal 2000 book, Bowling Alone, documented the growing fragmentation of American society, and the dangers to a democracy when its residents no longer interact regularly with people who have different political, economic, and cultural perspectives. Fifteen years later, Putnam’s warnings have come home to roost, as he writes in Our Kids: The American Dream in Crisis:

It’s the American dream: get a good education, work hard, buy a house, and achieve prosperity and success. This is the America we believe in—a nation of opportunity, constrained only by ability and effort. But during the last twenty-five years we have seen a disturbing “opportunity gap” emerge. Americans have always believed in equality of opportunity, the idea that all kids, regardless of their family background, should have a decent chance to improve their lot in life. Now, this central tenet of the American dream seems no longer true or at the least, much less true than it was.

A recent commentary for Spotlight on Poverty and Opportunity shows that the US stands out not only for high rates of general and child poverty. We are also an outlier in how narrowly we define poverty. A “consensual” measure of poverty pioneered in Britain in 1983 and now employed across a range of nations – from wealthy Japan to Bangladesh – “measures poverty using the public’s views on what is an acceptable standard of living in contemporary society.” Based on the majority’s views of life necessities, poverty is defined as the point at which adults lack three or more necessities and children lack two or more, “a level of deprivation at which households are much more likely to experience a range of other significant disadvantages including poor health and serious financial difficulties.” The authors note that, while that standard “has support from all social groups, across classes, gender, age and, importantly, political affiliation,” the US stubbornly clings to an outdated definition laden with value judgments.

So while “the public endorses the idea that in a wealthy country such as Britain, no child should have to do without a decent minimum of essential clothing, or be prevented from going on a school trip because their parents can’t afford it,” a growing share of children in our even wealthier country grow up in exactly those deprived circumstances. Moreover, many politicians suggest that there is nothing we should do about it.

Indeed, music education, which many of us take for granted, isn’t a given among poor students, since “Music classes are usually cut first when schools reevaluate their budget.” This is especially upsetting given a new study showing that music classes enabled low-income students who would otherwise lose ground in reading to maintain their skill level. As the study protocol illustrates, children in low-income communities must rely on private organizations to fill that critical gap: “Forty-two children between the ages 6 and 9 were recruited from the waitlist of the Harmony Project, an organization that offers free music education to children from low-income communities. Children were then randomly placed in a music place or not, with none of the children having previously received music education.” 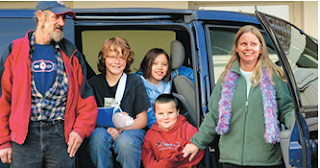 Last month, the Annie E. Casey Foundation looked back on its 25 years of investments in  documenting what it means to be a poor child in America.  In 2003, Casey popularized the term “the high cost of being poor,” spurring a host of federal, state, and local policies to address problems from predatory lending to food deserts. Perhaps most critical, the Foundation has provided advocates and policymakers with detailed state-by-state information to advance policies that help families avoid and stay out of poverty. Indeed, Casey President and CEO Patrick McCarthy joined The Hill to “explore policy ideas aimed at expanding opportunity for low-income children and their families -- from early childhood education and children's healthcare, to expanding the Child Tax Credit and Earned Income Tax Credit, to strengthening food assistance programs.” Check out the April 29 event summary here.


Finally, educators have weighed in on what education policy would look like if we were to take seriously the need to address these aspects of poverty and their impacts on students and schools. The Education Opportunity Network touts the California Build-and-Support model, and the Opportunity Dashboard advanced by Linda Darling-Hammond, over what it terms our current “test-and-punish” model. Targeted support for teachers is critical if school improvements are to succeed, given the difficult conditions teachers face every day in high-poverty schools, and the resulting low morale and high rates of turnover. In her recent YEP-DC Recess blog, a DCPS elementary school teacher agrees, pointing out Congress’ failure to include teachers in requests for “expert” input, and resulting wrongheaded policy choices.
______________________
About the Broader, Bolder Approach to Education (BBA)
The BBA is a national campaign that acknowledges the impact of social and economic disadvantage on schools and students and proposes evidence-based policies to improve schools and remedy conditions that limit many children’s readiness to learn.